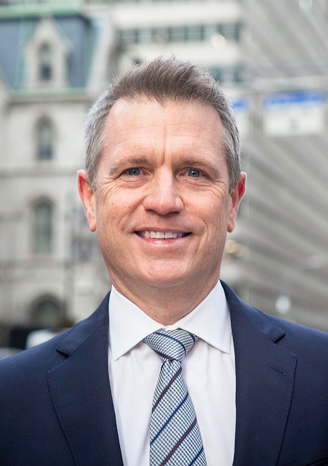 John has over 24 years of experience in the defense of personal injury, premises liability, premises security, construction defect, labor law, toxic torts, product liability and property claims. John has extensive experience with commercial litigation matters, both as a plaintiff and a defendant. John’s decades of experience with insurance coverage law allows for the providing of coverage opinions and the prosecution of declaratory judgment actions.

John is a lead trial attorney, having tried numerous cases in the Supreme Court of the State of New York and Superior Court of Connecticut. He regularly argues appellate briefs before the New York State Appellate Division as well as the Connecticut Appellate Court. He is a member of numerous local, state and national bar associations. John has served and does currently serve as an officer, board member and advisor in several private associations and non-profits.

John is a graduate of Vanderbilt University with a B.A. in History and English. He is also a graduate of St. John’s University School of Law. While at St. John’s School of Law, John was a recipient of a Rev. Tinnely Moot Court Award for oral argument and was named to the Dean’s list in all of his three years of law school. John was admitted to the practice of law in 1997. John joined the firm in 2001. Prior to joining the firm, John was an associate with an in-house counsel for a national insurance carrier and an associate with a prominent New York defense firm.

Currently admitted to practice in New York and Connecticut state and Federal Courts.